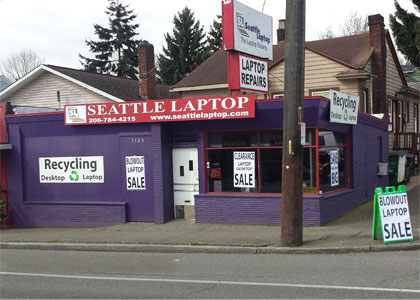 Dim Laptop Screen Repair : A laptop's screen can go dim for a variety of reasons. The most common causes of a dim laptop screen would be either the fl inverter, or the backlight tube inside the screen itself. Other causes can be a power problem on the sytem board, quite often caused by liquid damage, or something as simple as a loose connection.

Many customers have came into Seattle Laptop and said someone told them their "backlight" was out. Their friend was probably right, but a technician will have to determine what is causing the backlight tube to not light up. Below is listed some of the reasons for a screen to go dim.

There are a few more reasons to cause a screen to be dim, such as a shorted battery, but they are rare.

Customers have brought in laptops to Seattle Laptop and claimed they had a dim screen problem, but the screen stayed dim because the laptop would not turn on, even though the lights came on when the power button was pressed. This would be a power problem, and not a screen problem.

One of the more common problems causing a laptop's screen to go dim would be the fl inverter. In some cases this problem is hard to diagnose because inverters are famous for working intermittantly. Laptops will work fine for days or even weeks without a single problem, no matter how they are tested, and then all of a sudden the screen will start going dim every few minutes. Many times Seattle Laptop has tested a customer's laptop for days without seeing a problem, and we decided to replace the fl inverter anyway. This will usually fix an intermittant problem, but sometimes it is something else unfortunately.

Fortunately Seattle Laptop has hundreds of both laptop screens, and inverters in stock so we can easily fix almost every laptop with a dim screen without having to order parts.